I was thinking about what to write next when a memory popped up from many years ago.  Our family was living in a small community when a local young man committed suicide.  It was devastating.

We attended the memorial with most of the town in attendance.  The young youth pastor who spoke at the memorial service said something quite interesting.  He talked about death and how in America we are sheltered from death.  We don’t even see our meat slaughtered.  It’s all done somewhere else and put in neat packages.  It doesn’t really resemble something that was once walking around.

I’m not trying to make light of death, by no means.  And he wasn’t either.  We are a society that tends to “look the other way”, so to speak.  We see it in movies and video games far more than in real life.  We shelter our children from some of reality.

But, when death comes to you it is very scary to face it.  I lost my father at a young age and never got to say goodbye.  I was only about 4 years old but was left home.  That was the way our family dealt with things.  We lost a dear friend at the age of 21 and went to the funeral home with his parents for the final goodbye before cremation.  It was surreal.  I even touched him.  He was cold. It was sad.  And we said goodbye.

When we lost our daughter I was getting fretful over the fact of seeing her lifeless.  When her body arrived at the funeral home from California we were told we shouldn’t see her.  I remember our daughter-in-law asking why not?  We were told by the kindest man, with tears in his eyes, about how she looked after rock and structures had disfigured half her face.  I was good with that.  I have the most beautiful memory of her joyful face forever imprinted in my mind. I am thankful for that.  I know there are many who do not have that.

Death is never easy.  Loss is always difficult.  but these words of Emily Dickinson say so much about hope. 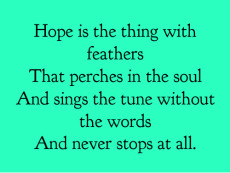 Hope is always there.  Hope can be your anchor through the hardest of times.  It keeps you going and keeps you strong.

Published by Cate B

I'm a writer/blogger. I am in love with Creation and especially THE Creator. He is my best friend. I love to write and I love to bake – especially pie – and I love to crochet – among other creative things…….. I am passionate about the potential I see in others…….. I want to help them get there. View more posts

2 thoughts on “Prisoner of Hope – Hope”