I follow this site daily and found this to be one that is to be shared. So to all the poets, the book writers, bloggers, podcasters and the like…….

Pen to Paper – your Lion Bites word for today

God is calling the writers and even those who know that there is a book within them. To you who have put off and put off the challenge of sharing your story, today is the day to start putting pen to paper. He is saying, “It only takes writing one page at a time. I need you to leave a legacy for the next generation. Poets, come forth as well! Lift up your pens!”

Psalm 45:1
My heart is stirred by a noble theme as I recite my verses for the king; my tongue is the pen of a skillful writer.

The last big trip we took was in February of 2005. The same son who is studying now in Scotland was studying in Shanghai, China for a couple of semesters. So why not go to China? Good grief, prior to that we only went as far as our country could reach and a little into Canada and Baja California.

This was a serious journey. Prepare we did. I learned two phrases in Mandarin and spoke them wrong while there. Our son took us on a jaunt to the Great Wall of China – crazy beautiful and a challenge physically. But rewarding.

This trip to Scotland we are in the second half of our sixties. A little plump here and there and live in a town where hills are almost non-existent.

Edinburgh, Scotland has hills. Yup. The first hurdle was the actual route to get to Scotland. Our local “International” Airport tends to be rather pricey. To save money we booked an Amtrak train to Chicago. A great ride – very roomy and plenty of time to sleep. 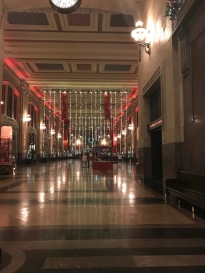 I was anxious about arriving in Chicago. My tummy tightens even now as I type these words. We packed way too much baggage and our airline check-in bags were very heavy. Not to mention that they were “outdated”. Did you know that they make baggage with four – 4 – spinning wheels on the bottom???? (insert laughter) They can go in any direction! Where have we been? All these twenty-somethings and their new bags were leaving us in the dust.

Then there was the Uber driver. His job was to get us from Union Station to our hotel by the airport for the next day flight. Apparently it was not his job to get out of the car and help the senior citizens put their HEAVY bags in his car. It’s amazing how fast we can lift and move with car horns blaring at us in downtown Chicago.

At the hotel I had to chat with Iceland Air about our flight to Glasgow. Their mechanics, a necessary position for an aircraft, were on strike. They booked us onto KLM – Dutch Airline – to Amsterdam then to Glasgow.

Relieved, we got a good night’s sleep and got ready for the shuttle to the airport. That went great. We were almost on standby until an angel from The Netherlands walked by and said, “Oh. I booked them last night. No standby for them.” And no charge for the extra bag we checked.

Fly KLM – no extra charge for food and a very pleasant flight.

waiting to board in Chicago 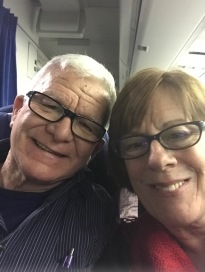 come fly with me 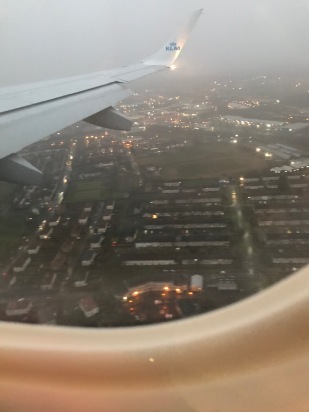 We were so happy to be on the ground in Glasgow. All we had to do was claim our monster bags and find our son.

While waiting for the bags I received a text stating that our bags were still in Amsterdam. I think I was relieved because they were heavy! Our son popped off a bus and got us to the train station in Paisley…….. 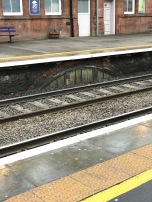 I know the dwarves enter here

As the train was entering Edinburgh I was beside myself with emotion. I wanted to capture every moment on my iPhone and just couldn’t do it justice. My emotions were running all over the place. Foreign land, yet not. So many of us Americans dream of Faerie Tales and Kings and Queens and Princes and Princesses. We are in awe of Downton Abbey life styles and high tea and accents from the United Kingdom. My husband and I watch endless BBC dramas and PBS series that tell of a different time and place. Not to mention so many of the classics came from this fair land that I was now in. I’m still in awe of the fact that we were there.

A dream come true. It was overwhelming to take it all in. As a matter of fact, I’m still taking it all in. At the end of each day I cried. I’m not even sure why. Part of it was the aches in my legs of the hills and cobblestones. Part of it was my insecurities of being in a place far from home. And part was that I was in SCOTLAND!!!

What an opportunity my son was given to be able to study in a place he loves. As we stayed in their flat I grew closer to his wife and saw she had blossomed in her many gifts of creativity. She became more alive in the magical land of Scotland.

Yes, magical. All you thought it would be it was that and much more. I can’t stress enough for you to not give up your dreams. They’ll shift and change some as time passes, but the ones that are meant to happen will, if you don’t give up. They may come suddenly for you or in time and planning and very probable will come to you in a very different way than you thought.

Thank you for patiently going through my processing of this journey. This is just the beginning. Enjoy the images (as simple as they are) and part three is to come…….. 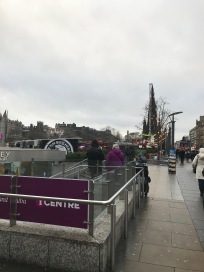